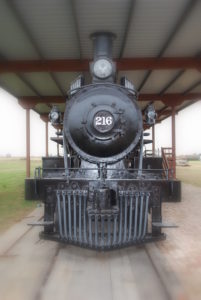 Called the American Standard, #737 has a unique history.  It was built in 1887 by Burnham, Parry, Williams & Co. in Pennsylvania. (Also known as the Baldwin Locomotive Works.) It began its career as one of the largest locomotive orders on record up to date, being commissioned for use on the Union Pacific Railroad.

In 1904 Southern pacific purchased the engine for the Louisiana Western and it was renumbered the #246.

Shortly after, in 1913, it was sold to the Erath Sugar Company and again renumbered.  She would finally be known as the #216 and ran until 1955. 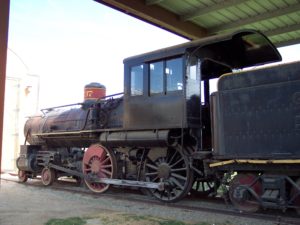 From 1957 to 1965 it resided at Bellow Falls, Vermont.  Then in 1965 the Steamtown Foundation acquired it and moved it to Scranton, Pennsylvania.  The Steamtown Foundation donated it to the Nevada State Railroad Museum in 1996 who in turn loaned it for display to the Feather River Rail society in Portola, California.  Eventually title was transferred to the Feather River Rail Society and in 2003 the Double T purchased the engine for the History Train, where it is proudly displayed as the Southern Pacific #216.

It is in fact known as the oldest Union pacific steam locomotive left in existence.  It was moved by semi-truck and weighs 65 tons, not including the tender. 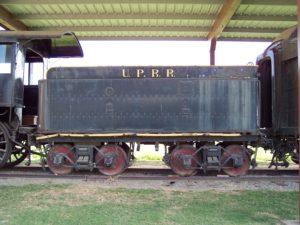