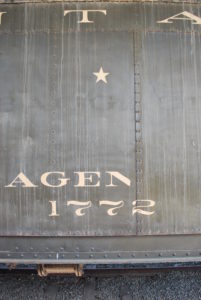 The Santa Fe car was built in 1910 by the Pullman Company.  It weighs 70 tons.  The #1772 transported baggage and mail from  1910 to 1966. The star on the side meant that there was a man in attendance at all times.  It ran throughout California and the Western states.  It was purchased from the Electric Car Museum in Rio vista and transported by house movers to The Double T in  2003.